The Academy were crowned Welsh Champions after a tough match against Llandovery College at the Principality Stadium. It is the first time that the CAVC team has reached the finals, after a fantastic season that saw them win nine of ten games and qualify from the Cardiff Pathway Pool.

The CAVC Rugby Academy flew into an early 13-0 lead against Llandovery after Harrison James converted his own try and kicked two penalties. The defence dominated initially, but after some nervous errors, Llandovery were able to score two tries just before half time.

Following a rousing half-time talk with Director of Rugby Martyn Fowler, the Academy came out re-energised with a clear message as to the changes needed to regain momentum – and the lead. A try from a driving maul saw Harper Chamberlain score in the city end corner. A further try from Harper was disallowed only for the cameras to show that he did indeed score, but the decision had been made.

As the rain fell at the national stadium Finn Charles nailed a nerveless 65th minute penalty to seal a famous victory – 23-17 to the CAVC Rugby Academy.

The CAVC Rugby Academy was formed in 2014 to provide the perfect platform for young, dedicated students who have an interest in performance and elite level rugby. The Academy places a strong emphasis on balancing sporting performance with educational achievement and CAVC is committed to supporting players with both.

Cardiff and Vale College Director of Rugby Martyn Fowler said: “To reach the final and win with a Rugby Academy programme that, when compared to others, is still in its infancy is testament to the hours of unseen work that this playing group and their coaching staff commit to on a daily basis.”

Captain Tom Caple said: “The decision to leave school to attend Cardiff and Vale College is one of the best decisions I ever made. The College has delivered on the academic and rugby promises it made with the Cup Final win and my studies on course for me to attend my first-choice place at university.

“The Cup Final experience was the best day of my life.”

Cardiff and Vale College Principal Kay Martin said: “To win the Welsh Schools and Colleges Cup Final after such a nail-biting match is a magnificent achievement for our Rugby Academy. All that training they have put in on the field and the gym, the power breakfasts before lessons and nutritional education have made all the difference to our Rugby Academy players. “I would like to congratulate the players for a win that reflects their commitment and dedication in what has been a difficult year, and Martyn and the rugby coaches and support team for such a fantastic result – everyone at the College is extremely proud of you.” 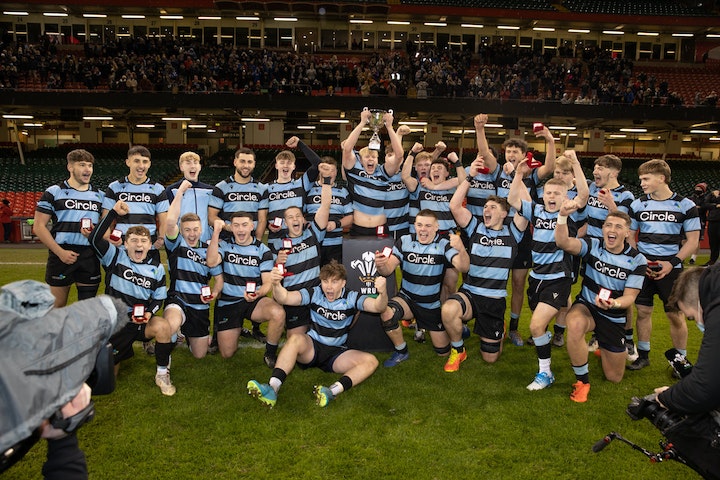